Singin’ in the Rain Auditions 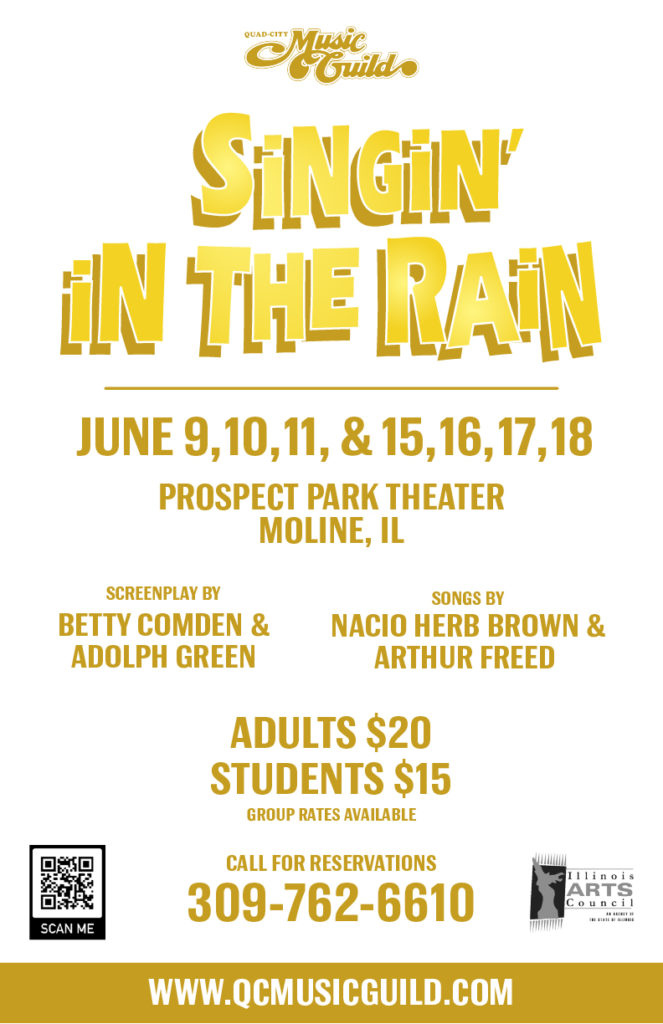 The “Greatest Movie Musical of All Time,” explodes onto the Quad City Music Guild stage with a new production this Summer! Singin ‘ in the Rain has all the makings of a Tinseltown tabloid headline — the Starlet, the Leading Man, and a love affair that could make or break careers! During the waning days of the Silent Movie era, Don Lockwood and Lina Lamont are a hottest item on screen and in the tabloids, but behind the scenes, things aren’t always as they appear.

The emergence of “talking pictures,” with the premiere of The Jazz Singer forces many

Hollywood studios begin to scramble to follow suit. When Monumental Studios turns silent The Dueling Cavalier into The Dancing Cavalier, a musical picture, to stay relevant, they are faced with the problem of their star, Lina who can’t sing, or even really talk. Enter Kathy Selden, an aspiring actress whose dulcet tones are well suited to cover Lina Lamont’s — calling into question what it means to act, how credit is distributed, and what it means to get a fair shake in the movie business. Faithfully and lovingly adapted by Broadway legends, Betty Comden, and Adolph Green, from their original away winning screenplay. Each unforgettable, scene, song and dance are accounted for, including the show-stopping title number Singin ‘ in the Rain! Hilarious situations, snappy dialogue and a hit-parade score of Hollywood standards make Singin ‘ in the Rain is the perfect entertainment for any fan of the golden age of Movie Musicals.

Quad City Music Guild’s production of Singin ‘ in the Rain is seeking a diverse ensemble cast who are proficient actors, dancers, and singers to tell this truly remarkable story. We hope you will join us for auditions.

Please prepare 16-32 bars of music from a musical of your choice. We prefer a piece that is up tempo, shows off your vocal range, and will demonstrate the type of performer you are that makes you appropriate for the character you are interested in portraying. You may choose a song from Singin ‘ in the Rain if desired. Please bring sheet music that is well marked and organized in a binder. An accompanist will be provided. No prerecorded music will be allowed. We encourage you to dress comfortably and wear shoes that will allow you to learn a short dance routine.