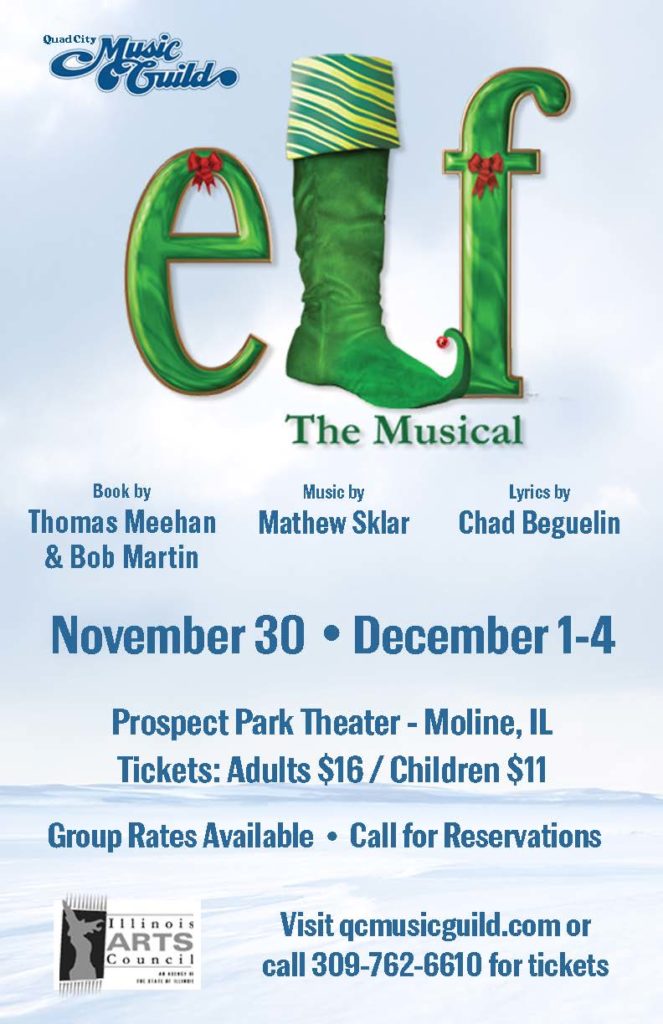 Begining on or about October 5 th , Monday-Friday Evenings

A title known the world over, Elf The Musical is based on the cherished 2003 New Line Cinema
hit, Elf and features songs by Tony Award nominees Matthew Sklar (The Wedding Singer) and
Chad Beguelin (Disney’s Aladdin on Broadway), with a book by Tony Award winners,Thomas
Meehan (Annie, The Producers, Hairspray) and Bob Martin (The Drowsy Chaperone).

Buddy, a young orphan, mistakenly crawls into Santa’s bag of gifts and is transported to the North
Pole. The would-be elf is raised, unaware that he is actually a human, until his size and poor toy-
making abilities cause him to face the truth. With Santa’s permission, Buddy embarks on a journey
to New York City to find his birth father and discover his true identity. Faced with the harsh realities
that his father is on the naughty list and his half-brother doesn’t even believe in Santa, Buddy is
determined to win over his new family and help New York remember the true meaning of Christmas.

We will be looking for a cast of 25 to 28 consisting of adults of all ages, with 6 to 8 children.
Children must be in 3 rd grade or older to audition. All who audition should prepare up to 32 bars of a
song that best suits your voice. Songs from the show are welcome, but not necessary. Please
bring sheet music for the accompanist, no recorded music will be used. Dress comfortably as you
will be taught a short dance routine prior to auditioning.

If you absolutely are not able to make either of the audition times, we will accept video auditions of
you singing, with accompaniment, up to 32 bars of a song that best suits your voice. Please do not
submit videos of previous performances, concerts or recitals. You may include a 1 minute or less
monologue and a dance routine of up to 2 minutes. Send your video audition and your
completed audition form to: president@qcmusicguild.com no later than 1pm on Sunday, September
18 th . Videos received after that date and time will not be accepted.

THE FOLLOWING ROLES, AND OTHERS, WILL BE FILLED FROM THE ENSEMBLE